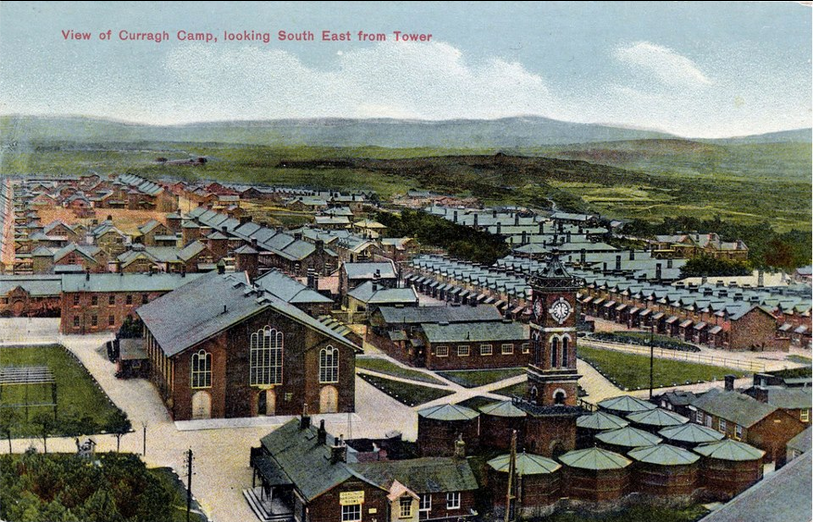 One hundred years ago this year, March 1914 to be precise, events at the British army camp on the Curragh, in County Kildare, Ireland, had a disastrous effect on discipline within the army and inflicted irretrievable damage on the careers of many leading figures within its ranks. The events have gone down in history as the Curragh Mutiny, although one may argue that the name is not strictly accurate as no British army officer mutinied by refusing to obey an actual order.
Events unfolded on the 20th March 1914 when Hubert Gough, Brigadier-General commanding the 3rd Cavalry Brigade of the British army, stationed at the Curragh camp, was summoned to Dublin to attend a meeting with other officers.

Home Rule for Ireland was on the statute books and Ulster Unionists and their military wing, the Ulster Volunteer Force, threatened to resist any attempt to implement this new law.
The officers were addressed by Sir Arthur Paget, Commander-in-Chief of the British Forces in Ireland, who made an intemperate speech. He informed them that extensive operations in Ulster were imminent and stated that; officers actually domiciled in Ulster would be exempt from taking part in any operation that might take place there. They would be permitted to ‘disappear’ (that being the exact phrase used by the war office) and when all was over would be allowed to resume their places without their careers or positions being affected. Officers who stated they were unwilling to serve might tender their resignations, but these could not be accepted. Officers doing so would be dismissed from the service.
The officers present were shocked and many were incensed at Paget’s statement. When the officers returned to their respective commands and relayed the information they had received to their subordinates, Gough along with fifty-nine of his seventy fellow officers tendered their resignations, as they were unwilling to initiate military action in Ulster.
On hearing of the resignations, Paget travelled to the Curragh and addressed the troops but instead of rectifying the situation, he made it worse.

As the disgruntled officers entered the room, Paget knew he had to convince them to withdraw their resignations. He began the talk by stating that he was appalled at the officer’s actions and that they were a disgrace to the army. After lambasting the men he moved on to the deployment of troops that was taking place. Precautionary movements had been carried out by troops in order to guard certain stores in Ulster and a battery of guns in Dundalk. These actions had been carried out as much out of fear of action by ‘Hibernians’ as by the Ulster Volunteers. British troops had been welcomed into the northern province and a large reserve camp had already been established on the Boyne.
Paget took the unusual course of explaining his orders and actions to those assembled. He declared he had no intention of carrying out coercion measures against Ulster and that if he had to deploy a large body of troops into Ulster, he would ride at the head of the column himself. If he met the Ulster Volunteers, he would ride forward and talk to their leadership and if fired upon, he would not order his men to return fire. He wanted a cavalry unit to act in a reconnaissance role to prevent his main force from coming upon the Volunteers unexpectedly. This would prevent both sides from losing control of the situation. This suggestion only filled the officers with disdain as they contemplated the pantomime battle that would ensue. He reassured the men that a troop of cavalry would be deployed in the south in order to protect Protestants against possible actions by the Hibernians. His actions had been intended to prevent bloodshed, not provoke it and he demanded to know, did his officers not trust his judgement as Commander and Chief? He said that he would not obey orders from politicians if he did not know they had the sanction of the King.
Paget went from puerile arguments to all-out threats as he attempted to get the officers to withdraw their resignations. He stated that all senior officers would be tried by Court Martial. Those assembled remained calm as they knew that they had committed no offence that would see any of them facing a military court.

He left the room having obtained nothing but leaving his audience with a bad impression. What surprised many of those who listened to Paget’s address was that he never appealed to their honour or sense of duty but continually talked about the ruin of their careers. Even after Paget’s address, the situation was far from under control. The Secretary of War, Seely, gave Paget permission to suspend any officer tendering his resignation.
The British War office in London summoned the rebellious officers and over the next four days, a compromise was agreed between senior officers and Secretary of State for War, Colonel Jack Seely. However, Gough wanted a written assurance that the army would not be compelled to force Ulster to accept Home Rule. After much deliberation, Seely provided a written guarantee that was repudiated by the government as the terms of the guarantee had exceeded those given by the cabinet. Seely was forced to tender his resignation over the incident though Paget’s own offer of resignation was not accepted.
Gough returned to his command, a hero though he maintained that the issue was more to do with the attitude of Paget and the War Office than with the Ulster question and that the hysteria created by Paget whom Gough labelled, ‘a stupid man.’

As the dust settled on this chapter in British military history, Ulster Unionists and Irish Nationalists were putting their plans to smuggle weapons into Ireland into action.
Although a temporary calm within the army was apparent in the immediate aftermath of the Curragh crisis, it had exposed much that was to remain uncertain, in particular, the army’s division on the question of the Ulster Volunteer Force and the army’s relationship with the government.
One of the major protagonists in this affair was Field Marshall Sir Henry Wilson. He disliked the government and continuously added fuel to the fire by advising Gough and the other officers in relation to the incident at the Curragh. He came out of the affair unscathed and went on to hold a number of prominent posts within the army and also as an adviser to the Prime Minister.
The outbreak of the First World War in August of 1914 postponed the implementation of Home Rule for Ireland but much damage had been done to the British government’s authority and of the idea of the army being above politics. However, the Officers and men of the British army embarked for a war in Europe that was to last four bloody years.
On the outbreak of war, Gough found himself taking his Brigade to France. As German forces swept through Belgium, the B.E.F. was ordered to hold a defensive line along a 16-mile length of the Mons Canal. The town of Mons was the centre of the Belgian coal mining area, dominated by small villages and slag heaps. British forces began to dig in and make ready. Both Haig and the newly appointed General Sir Horace Smith-Dorrien were concerned about their ability to hold their positions.

At 11.15 hours on Saturday 22nd August one of Gough’s artillery batteries, E Battery of the Royal Horse Artillery, fired the first shot of the war against the advancing Germans as Gough’s line extended along the Sambre and Meuse canal, east of Mons. The outnumbered British Expeditionary Force that found itself in France and Belgium during August of 1914 managed to halt the advancing German and Austro-Hungarian forces, enabling a line of defence to be established. Though the army suffered heavy casualties, they proved that they were willing to fight and obey orders from the civil administration. At the outbreak of the war, the British government had regained its control over its army and it was this important factor that would enable it not only to stop the German advance but also to continue fighting around the world for the next four years. A new army had to be raised and the government needed to control this army so that it would fight anywhere and everywhere it was needed. While there were some minor incidents of disobedience in the forces during the war, the government never saw a repeat of the Curragh incident. 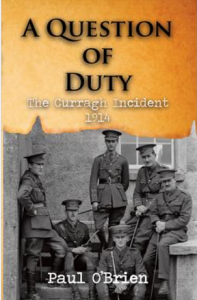 The British army’s involvement in the Ulster crisis and the British government’s failure to act appropriately left a deep distrust among Irish Nationalists. There is no doubt that the outbreak of war in Europe in 1914 diffused the situation in Ireland at that time. However, unknown to many there was a plan to rebel against British rule in Ireland that would explode onto the streets of Dublin in April of 1916. This action would shock many and bring back the cause of Irish independence to the forefront of Irish and British politics. A War of Independence and a bitter Civil War would follow that would result in the partition of Ireland, the establishment of an Irish Free State and the deaths of thousands of men, women and children.