In recent years the centenary of the ending of World War One or as many thought at that time, the War to End all Wars, has been commemorated in Ireland, America, England and throughout the world.
After the opening few weeks of battle, the war became a stalemate as both sides dug in and trench warfare was to dominate the field of battle in the years that followed.
In order to break this stalemate on the Western Front, tanks were developed, and used for the first time by Allied Forces on 15th September 1916 during the battle of Flers Courcelette. 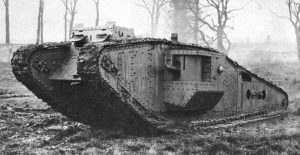 It is a little known fact that one of these tank crews included a black cat named Percy.
The little black cat joined the crew of tank number D20, the vehicles call sign being Daphne. 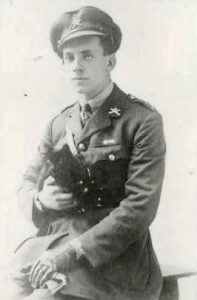 The tanks commander Second Lieutenant Harry Drader was filmed holding Percy before the big battle. The film ‘The Battle of Ancre’ reveals a small fearless black cat being held by the officer.
They pose outside the tank before the lieutenant carefully passes Percy into the vehicle before they all set off for the front line.
The battle, like all battles, was fierce with many casualties on both sides. However, Percy and the crew of Daphne survived to fight another day.
Lieutenant Drader was mentioned in dispatches for bravery and received many medals and the family history recounts that every time the tank went into battle, Percy was by the crews side.
When the armistice was signed in 1918, Percy the tank cat returned to England and lived with the Drader family at Colney Hatch, England.
As the world commemorates those who fell during this terrible conflict, let us remember Percy, the tank cat. Whoever said black cats were unlucky?

This is the short film with Percy

By some distance the best park bench memorial I’ve ever encountered.