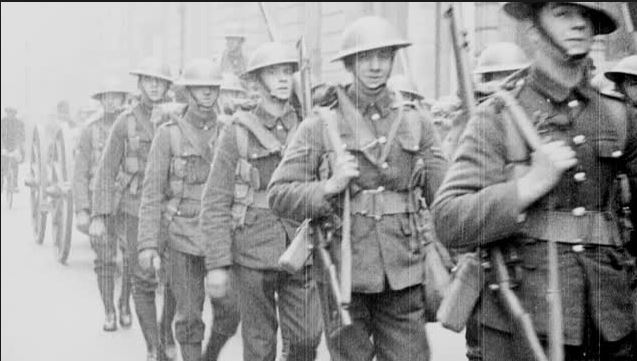 In the aftermath of the 1916 Easter Rising, republican forces had been seriously weakened with the subsequent executions of many of its leaders and the incarceration of an estimated 1800 of the organisation’s rank and file in prisons throughout England. These prisoners were later moved to a prison camp at Frongoch in Wales. It was here that a new leadership emerged with a very different strategy of how to gain independence from Britain. Michael Collins emerged as one of these new leaders and he knew the importance of intelligence in waging a campaign against British forces in Ireland. A new war would be fought but not in the conventional way that Irish nationalists had done for centuries. This new war would be one of insurgency; a guerrilla war, that would comprise of hit and run tactics against what was at that time, one of the most powerful Empires in the world. Guerrilla warfare may be defined as ‘A special type of warfare based on mobile tactics by small, lightly armed groups who harass their opponents rather than defeat them in open battle.’ Collins knew that his force was considerably weaker in men and arms than his opponents who, at that time, were fighting a World War in Europe. 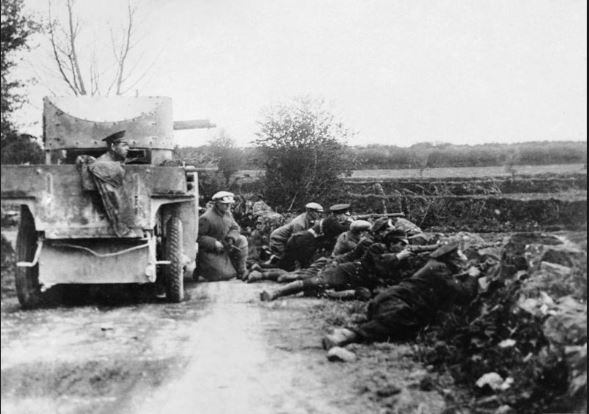 While imprisoned in England and Wales, the Irish Republican Army (IRA) began to establish a network of operatives that would, on their return to Ireland, commence an insurgency against the Crown. By late 1916, republican prisoners began to be released from jails in Britain, returning to an island that had changed and was in some ways more sympathetic to the republican cause. The campaign waged by the republicans began in early 1917. Collins knew that an insurgency was a protracted struggle that had to be conducted methodically, step by step, in order to attain specific objectives, leading finally to the overthrow of British rule in Ireland.

The battle plan for an insurgency and also a counter-insurgency campaign consists of six facets that a commander must consider and then execute. The six are: Objective, Civil Support, Build up, Attrition, Transition and finally Take Over.

Collins had a clear objective which was to over-throw British rule in Ireland. Sinn Féin, which had accidentally become synonymous with the Rising of 1916, became the political wing of the republican movement and polled successfully in the 1918 elections. Its elected representatives refused to take their seats at Parliament in Westminster, London, but instead created their own Irish government known as the Dáil. The executions of the leaders of the Rising gave Sinn Féin and the IRA considerable civil support throughout the country. The build-up of the political wing,  Sinn Féin, was perhaps more successful than the build-up of the military section, the IRA, as acquiring arms and munitions continuously posed problems for republican quartermasters. 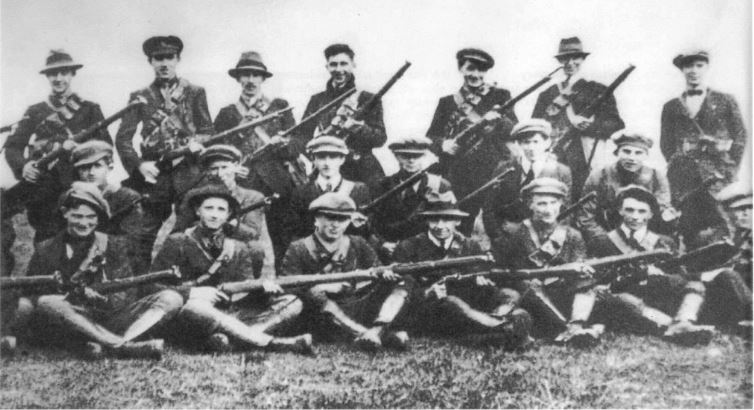 Both sides must execute what military theorists call the attritional stage of the campaign where each side tries to wear down the other. The attack at Soloheadbeg that resulted in the deaths of two police officers, both Irishmen, was an escalation in the war of attrition and put pressure on families as well as officers and civil servants.  Ambushes, both urban and rural were frequent with the escalating violence affecting every county throughout the country.

The transitional period was difficult to attain for the IRA as they neither had the manpower nor the weapons to achieve this. Perhaps the attack on the Custom House in Dublin during May 1921 may be considered an escalation from guerrilla hit and run tactics to an action that some may consider a change to a larger scale conventional operation.

The take over by the insurgents may be deemed the Truce of the July 1921 and later, the signing of the Treaty that gave Ireland its status of Free State.

Counterinsurgency tactics by the British were, from the outset, inadequate. As the demoralised RIC took the brunt of republican attacks, many left the force, leaving a void that could not be easily shored up. Recruits were hastily enlisted and became known as Black and Tans due to the shortage of uniforms. They wore part police and military attire with Irish people comparing the paramilitary force to a pack of Limerick hounds with similar colouring. With little training, they were thrust into the frontline of policing in Ireland and like their predecessors suffered heavy casualties in the war against the IRA. It was devised in Parliament to recruit a force of ex-officers, a Gendarmerie, to take the fight to the insurgents, a specialist force that would not ask nor give quarter to the terrorists. The Auxiliary Division of the Royal Irish Constabulary were deployed in Ireland from July 1921 and after a number of initial setbacks began to achieve results through raids and counter-intelligence operations. 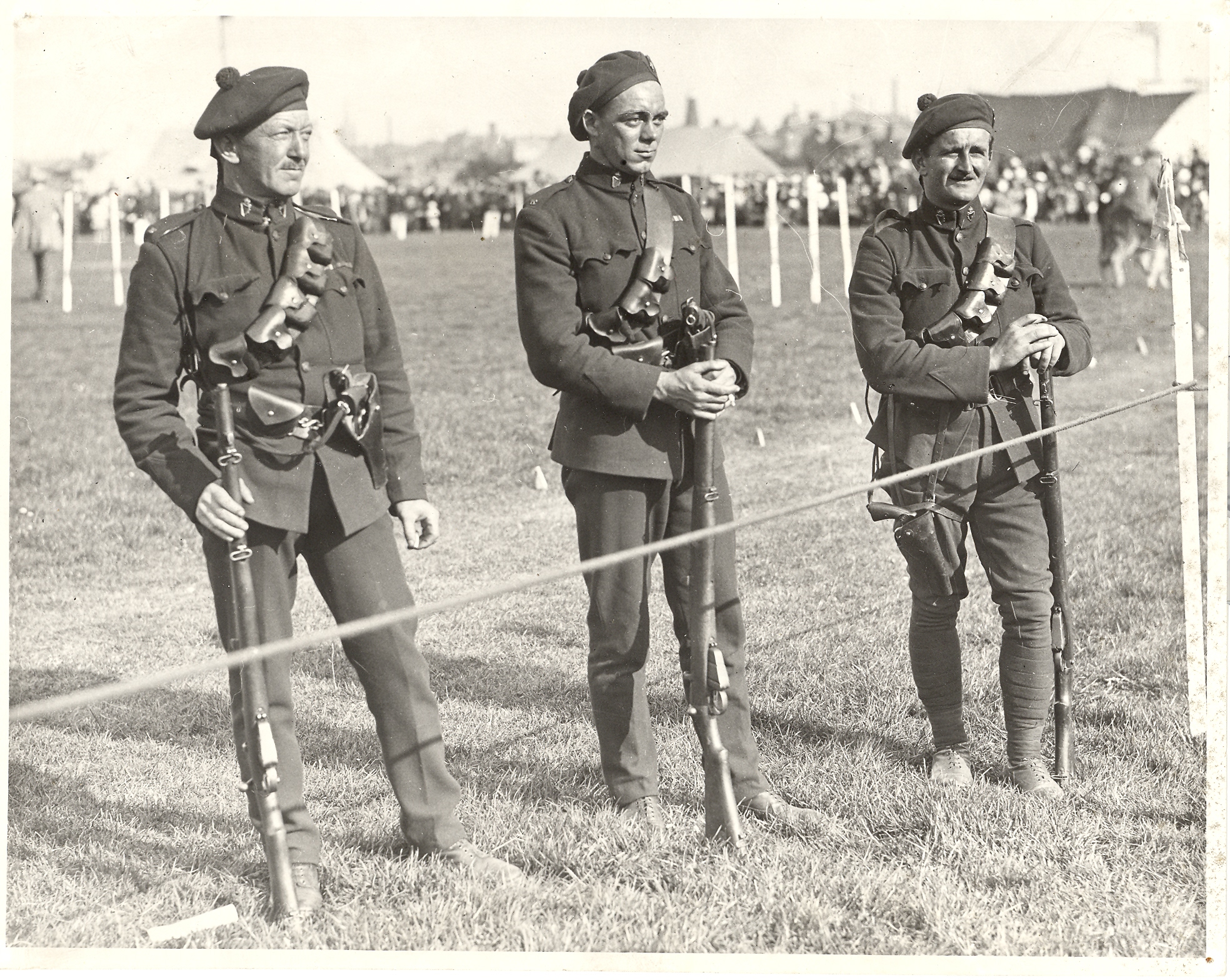 The authorities failed to have an objective as they failed to realise that they were fighting a war, leaving the police to hold the line for far too long. If the army had been deployed sooner, the IRA campaign may have been brought under control.

In all counter-insurgency wars, one must gain the support of the population. The British failed to achieve this from the outset with their heavy handed tactics that included Black Ops and violent reprisals. While the counterinsurgency forces greatly outnumbered the insurgents in manpower and logistics, they failed to deploy in any coherent manner and were in many cases rendered useless. Parliament also failed to address the number of problems Irish people were experiencing and this failure by politicians further marginalized the authorities.

In the war of attrition, Britain suffered greatly as the IRA, the weaker force, waged a cheap war against the authorities. This forced Britain to flood the country with troops which cost the exchequer money. Damages and claims also hindered Parliament. Britain never managed to escalate the war so the transition from Guerrilla warfare to conventional warfare was never achieved. Patrols and the lock-down of areas hindered the operational capacity of the IRA but never forced them to confront the British in open battle.

The take over phase came when a Truce was agreed and later the signing of the Treaty. Politicians intervened in the war in spite of the fact that military commanders on the ground believed that the insurgents were almost defeated as they lacked manpower and munitions to continue the war.

While an Independent Irish Republic was not achieved through the signing of the Treaty, it did bring two years of insurgency warfare to an end. The partition of the country followed and Ireland soon erupted into a bitter Civil War, as the IRA split. Conventional warfare would develop into guerrilla warfare as the new Free State Army found itself fighting a counter-insurgency campaign against the IRA.

The lead vehicle slowed as the driver noticed a figure standing in the roadway. Through the haze of twilight, the figure resembled a British officer, the distinctive cut of his jacket and Sam Browne belt being the tell tale signs of a soldier of the crown. As the Crossley Tender prepared to stop, an object came hurtling through the air and landed in the cab of the truck.

The windows of the cottage imploded as a hail of bullets cut through the building. The crash of shattered glass and the splintering of the wooden frames alerted those within that a full-scale attack was underway. 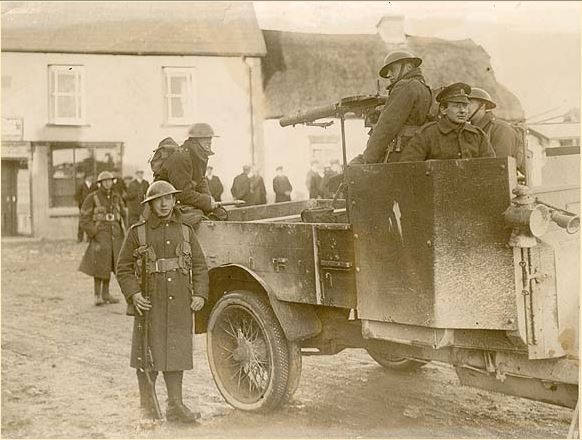 The Volunteers drew back the bolts of their .303 Lee Enfield rifles before pushing them home, the bolt head stripping a bullet from the magazine, loading the projectile into the breach.

Operation Ares – The Burning of the Custom House, May 1921 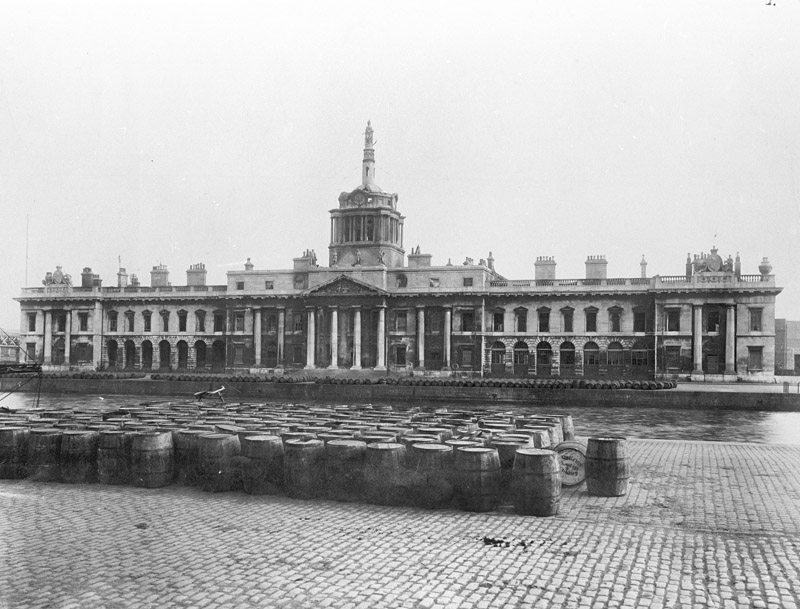 The British government launched a counter-insurgency campaign which witnessed the bolstering of its police force, the Royal Irish Constabulary, with reinforcements, the deployment of a Specialist Forces unit in the form of the Auxiliary Division, and an increase in military support for the British administration on the island.