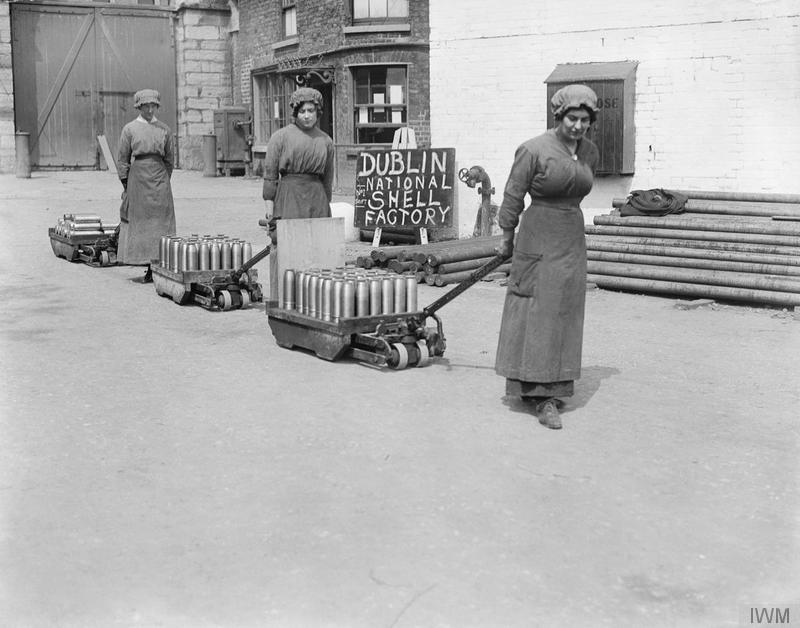 2014 is the centenary of the outbreak of World War One. Commemorations and remembrance ceremonies relating to those who fought and died in this conflict are being planned and carried out throughout the world. However, there is one group that has been forgotten; the female munitions workers. Many gave their lives for war production and in Dublin, Ireland, these women also worked to feed the endless amount of artillery pieces with shells. The women who worked within the National Shell Factory located on Parkgate Street Dublin are one such group.
As German forces swept into Belgium in August 1914, Britain’s declaration of war was followed by the mobilisation of its armed forces. Britain managed to field a highly trained force of professional soldiers, though its armed forces lacked in numbers and suitable equipment. The army and navy had been used for policing the empire, and colonial wars differed greatly to sea and land hostilities on a continental scale. Fighting in Europe against developed and industrial nations would prove to be very different from policing the colonies.
By the end of December 1914, a stalemate had developed on the Western Front with both sides digging in with elaborate trench systems stretching from the coast to the borders of Switzerland. The army was suffering from an acute shortage of heavy artillery and an inadequate supply of suitable shells. Since the beginning of hostilities, the War Office was only supplying shrapnel shells for its field guns. The newly developed 9.2 howitzers deployed to France in October 1914, fired high explosive shells, but these were in limited numbers.

When the Prime Minister, Lloyd George, announced the formation of a new Coalition Government in May 1915, he also stated that a new government department would be created called ‘The Ministry of Munitions.” The Prime Minister would undertake the temporary direction of this department, and with the implementation of the Defence of the Realm Act, extend powers that included conducting affairs under war conditions, government control of existing armament factories and the requisitioning of civil engineering works for munitions manufacturing.

As the major arms manufacturing companies struggled to supply weapons and munitions, various local Munitions Committees organised themselves throughout Britain and Ireland. These committees represented the smaller engineering companies many of which had acted as sub-contractors to the larger armament companies. The first group to be established was the National Shell Factories in Leeds, England. A number of small engineering companies came together in the manufacturing processes of light shell casings. Every National Shell Factory was overseen by a local board of management that worked directly with the main engineering companies in that area. Factories were established in existing buildings such as mechanical repair shops, railway workshops and tramway depots.

As countries geared up for war production other non-essential trades suffered. The war was proving unpopular in Ireland as it brought very few of the economic benefits enjoyed by cities such as Belfast, Leeds and Birmingham. Ireland’s principal industries did not suit war production. Many women such as seamstresses were made redundant leaving thousands out of employment. However Lloyd George pushed through his plans for increased war production and with the establishment of the new armament factories in Ireland, many women gained employment though some of it was hazardous. 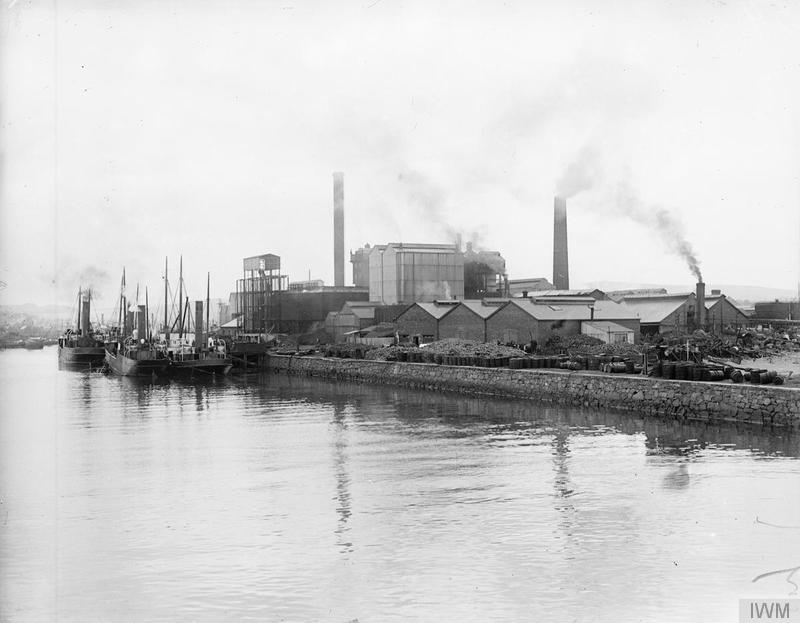 In Ireland National Shell Factories were established in Dublin, Cork, Waterford and Galway employing 2,148 men and women. Workforces consisted of mainly women as only five per cent of this new industrial workforce could be male under government munitions regulations. Many men were required for military service and only protected and essential trades could hold on to their male employees.

The National Shell Factory, Parkgate Street, Dublin was started in March 1916 for the production of 9.2 Inch shells and fuses. By June 1916, just two months after the Easter Rising, the large scale production of armaments at Parkgate Street was up and running. In September, the Ministry of Munitions established offices in Dublin to co-ordinate and oversee production and that the plant was meeting manufacturing targets and delivery deadlines.

With long shifts and often dangerous conditions, many working-class women found themselves employed on the shop floors of the shell factories. Women were trained in the use of lathes, milling machines, grinders and assembly techniques. Fly presses and punches churned out shell casings by the thousands. Repairs to tooling were carried out on the shop floors with a rapid turn around so as not to halt production.

Middle and upper-class women assisted the war effort through charitable work as many believed that paid labour carried a social stigma. The Voluntary, Irish Munitions Workers Canteen Committee provided subsidised meals for those working within the Shell Factories. At the beginning of shifts, workers received a cup of tea and a bun. These types of tokens were seen as morale boosters for the workers who would strive to increase output for the men in the trenches. Copying the British design of the Voluntary Aid Detachment (V.A.D.), groups of volunteers helped out within the factories to raise morale amongst the workforce. One such group was commanded by Mrs Hignett who had received training in England from Lady Lawrence, founder of the voluntary movement. (1)
As shifts sat down for their subsidised meals, a columnist for the Irish Times wrote that workers would be,

waiting to hear the news read to them. They always clamoured for this and then listened to the gramophone or sang and danced before filing back to their war work. At tea time they were back for half an hour and it seemed no time again, so crowded with work were the hours for the canteen workers before the hot supper was ready for the new hundreds on the night shift, every one of whom knew the mighty difference between all night work on a parcel of food eaten ‘where they could’ and this new regime in which delicious meals were served by devoted women in attractive canteens serve to break up the hours of hard munitions work…The steaming food, the flowers, the dance, the gramophone, and the rest when necessary, all combined to vastly increase the output of shells and cartridges. If any ladies seek employment at war work of a wholesome and ennobling character they cannot do better then enrol in Mrs. Hignett’s army of workers. 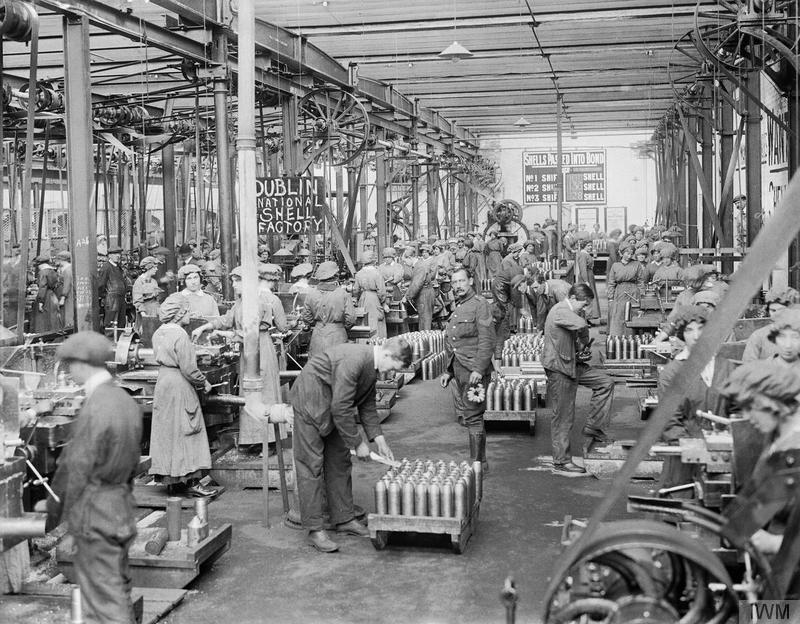 Many young women were forced to leave school early and take up employment. Factories offered secure employment and also a sense of camaraderie among fellow workers. Considering the alternatives of working as a domestic or getting married young, many women chose war work whether in the factories or by volunteering.

As the war progressed thousands of shells made in Irish factories were transported to the front lines having been filled with high explosives at other plants.
By March 1919, with the war ended and industry slowly reverting back to peace time production, the National Shell Factory in Dublin had manufactured half a million shells worth £569,000 and fuses worth £98,000. This accounted for 80 per cent of output produced in Irish Shell Factories.

Today, the National Shell Factory at Parkgate Street still stands, protruding out onto the River Liffey, a reminder of not only Ireland’s war time production but also as a memorial to the hundreds of women that worked for the war effort and that were forgotten and assigned to the dusty annals of Irish Great War history.