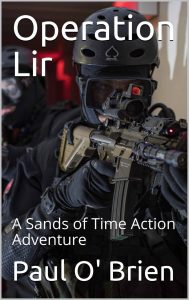 The lights in the passageway flickered on and off, casting eerie shadows on the ship’s bulkhead. Comms were down, nothing came through the earpiece. Where were the others? Finn moved cautiously, the stock of his suppressed Heckler & Koch HK416 firmly embedded in his shoulder, the red dot of the laser sight cutting through the semi-darkness.

He heard the target before he saw him. The man came around the corner, stopping abruptly when he saw Finn. He was big. Not tall, but of military physique with tightly cropped hair, muscular and of eastern European stock. His gun was carried at the trail. Only a few feet lay between the two men.

Surprised by the unexpected intrusion, the man hesitated and stumbled to raise his weapon to fire but the laser sight was already on the Tango. Finn squeezed the trigger and the suppressed weapon barely made a sound. The body hit the floor with a thud.

Finn turned and looked behind him for the girl. She was gone. ‘Shit’, he thought. Where the hell had she gone? She was there one minute and now she had vanished. He turned back down the passageway and looking through the doorway of one of the compartments, his eyes fell on his quarry.

A crewman held her fast, his left arm around her neck and a large knife in his right hand pointed towards her ribs. As Finn entered the compartment, he felt the muzzle of an automatic on the back of his head. He lowered his weapon and stood facing the crewman and his captive. ‘Now it is your turn to die soldier’, a voice came from behind him. Two Tangos and a hostage. Finn knew he had to act, and act fast.

Sure, wasn’t that what all the training had been for!

A Sands of Time Action Adventure by Paul O’Brien

Mad that the pandemic started and ended with a bat out of hell.