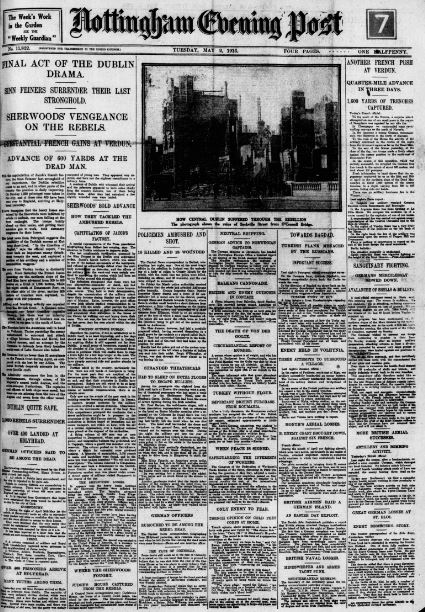 “The Law Courts have also suffered somewhat severely both back and front, and show unmistakable signs of having been severely shelled. The whole of the windows have been shot out, leaving the rooms bare to the gaze of the people in the street. Grafton-street has not been much damaged, the destruction there having mostly been done by looters, who smashed the windows of many shops and cleared out their contents.

“In some of the slum parts there are signs of heavy fighting, houses being blown down and hardly a window left intact. In fact, it is almost impossible to pass through any thoroughfare which does not show signs of some phase of the fighting, small holes in the top windows of the houses showing where sniping has been taking place.

“At the corner of Middle Abbey-street there is to be seen a curious sight. Barricades were erected there, and these have now been pounded into almost unrecognisable pieces of scrapped steel, covered with debris from the fallen houses over two feet thick. Upon the north side of St. Stephen’s Green the windows are pitted with rifle shots.

“In the hotels there are many visitors left stranded, and their experience with the rebels entrenched in the Green has been a curious one. At the Shelbourne Hotel, one of the largest in Dublin, mattresses and all kinds of expensive furniture were used as barricades to the doors and windows to protect the inhabitants from rifle fire, and the building was occupied by a force of military. Similar experiences were gone through at other great hostelries. The members of the D’Oyley Carte Opera Company, who were in Dublin when the revolt broke out, have been since at the Gresham Hotel, in Sackville-street, and many refugees have found accommodation in the Customs House.

“This morning all has been quiet, only a few shots from snipers being heard, and it is apparent that the real resistance is at an end. The task of feeding the populace is proceeding smoothly, and in this matter words of praise are due to the work of the local officials of the London and North-Western Railway Company, and of Messrs. Pickford. Limited, who have worked day and night to bring order out of chaos. This morning over 2,000 loaves were received from Euston, and distributed amongst the needy, and it is reported that there is a plentiful supply of other necessities of life. Business throughout the city has not been resumed to any extent, nor can it under the circumstances do so for some days. 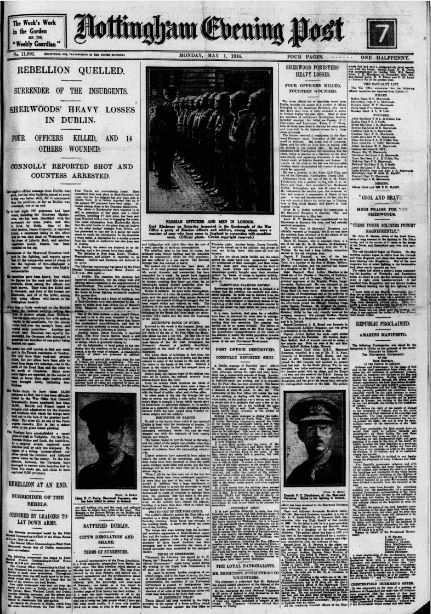 “A spectacle unique in the history of Great Britain was witnessed late last night [30th April 1915] at North Wall, when some 500 prisoners were marched down from their temporary quarters and placed on board a steamer lying alongside the wharf. The transport took place almost in darkness, and the march of the captives, accompanied by a strong guard, was accomplished in about half an hour. There was complete silence in the ranks, and beyond the tramp of the foot no sound was to be heard. Upon arrival at the London and North-Western Railway at North Wall the men were sent through the underground passage to the wharf, where they were embarked.

“Through the kind offices of an official I was enabled to board the boat and witness the prisoners take up their quarters in the well of the ship and in the steerage. The sight was a weird one in the darkness, which was only illumined by the dull lights hanging over the decks. A knot officers stood at the gangway checking the prisoners as they passed down below, and sentries were posted around the deck with fixed bayonets.

“As the rebels arrived on board one was able to study the demeanour and general characteristics of the men. Some of them were in the heather green uniform of the Irish Volunteers, but the great majority wore their workaday clothes, and appeared to of the working class. There were certainly a few amongst them who would be classed as intellectuals – tall, clean-cut looking men whose avocations in life were probably to be found in the professions. It was a mixed crowd, representing almost all classes of the community, although, as already said, the majority were akin to the rabble which can be found in any largely populated town.

“But the most surprising thing of all was their demeanour. The spirit of defiance and hatred which has kept them fighting against overwhelming odds for upwards of a week, and bade them throw in their lot with Great Britain’s deadly enemy, was, notwithstanding their miserable condition, firmly stamped upon their faces. Some went jauntily below, while others, with set lips and stern faces, walked between the onlookers looking neither to one side or the other.”

“A LITTLE GIRL AND THE SHERWOOD FORESTER.

“STAUNCHED OF BLOOD WITH HER APRON. 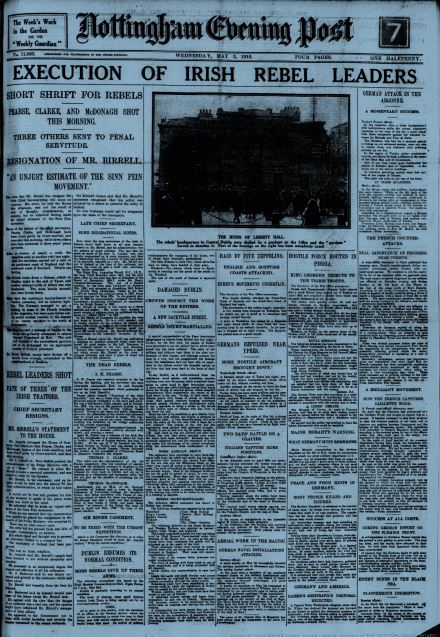 “Mr. J. F. Cronin, president of the Preston Irish Literary Society, who was spending Easter in Dublin, has given a Daily Dispatch representative a vivid narrative of incidents which he witnessed during the first four days of the rebellion.

“On the Wednesday afternoon [26th April 1916],” said Mr. Cronin, “I paid one of numerous visits to the fighting area. In Lower Mount-street I saw the Sinn Feiners firing from the windows of a big detached house, and here witnessed the heroism of a little girl.

“I saw a soldier lying on the canal bridge apparently dead. Suddenly a woman came out into the open with what looked like a blue enamel jug. She ran down the canal bank into the firing line and disappeared from view. Then a poor girl ran out on to the bridge while yet the bullets from rifles and revolvers were flying thickly from both sides. She put up both her hands, and almost instantly the firing ceased. Again the woman turned up, and she and the girl picked up the soldier, others then going out from the crowd to help to bring him in. He was taken into hospital.

“It was a throbbing incident that brought tears to the eyes, and the crowd cheered the little heroine.

“Several more soldiers were hit, and again the little girl ran out and brought them in time after time. I saw about eight soldiers taken into that hospital wounded, and I helped one in myself along with others of the crowd.

“The man I helped with was reached by a little girl before we got to him, and she pushed an apron down his trousers to staunch the blood. He was shot in the small of the back and in the thigh.

“He was a Sherwood Forester, and the little girl was crying over him.”

Thanks to Jim Grundy